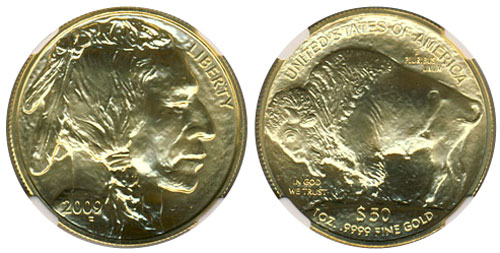 The 2009 Gold Buffalo (Buy on eBay) bullion coin was offered by the United States Mint after a long delay and some rumors that the coin would not be issued. Once it was finally offered, it managed to sell a large number of coins very quickly.

The 2009 Gold Buffalo bullion coins were finally available to authorized purchasers on October 15, 2009. From the start, the pace of sales was extremely strong due to pent up demand for the offering. By December 4, 2009, the US Mint had sold out of their entire inventory of coins and stated that no additional coins would be produced for the year. In less than two months, a total of 200,000 coins had been sold, representing the second highest annual total for the series.

Separately, the US Mint offered the 2009 Proof Gold Buffalo with sales beginning on October 29, 2009.